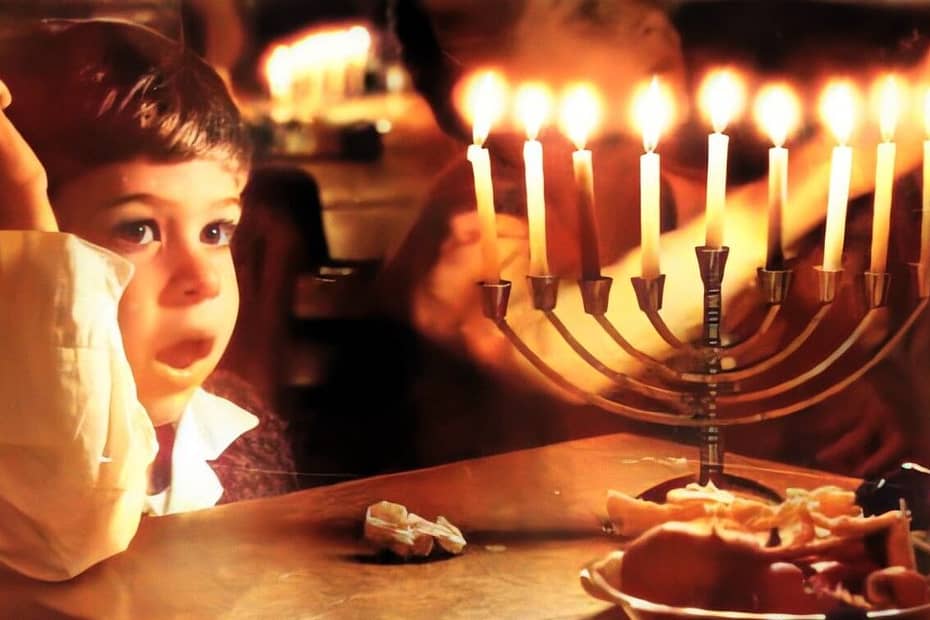 Is there something idealistic and holy in loving the Jewish people? Or is this just another form of nationalism, an emotion far less noble than a universal love for all peoples?

The minimal obligation during Chanukah is to light one candle each night of the holiday. The academies of Hillel and Shamai, however, disagreed as to the optimal way to light:

What is the reasoning behind each opinion? The Talmud explains that Beit Shamai compared the Chanukah lights to the bull offerings on Succoth, which decrease in number on each successive day of the holiday. Beit Hillel, on the hand, followed the dictum that “In holy matters, one should increase and not detract.”

Is there a deeper philosophical basis for this disagreement? And what is the connection between Chanukah and the Succoth offerings?

The conflict between the Maccabees and the Hellenists was not just a military struggle for political independence. The essence of the conflict was ideological, a clash between widely divergent cultures. Greek culture emphasized the joys of life, physical pleasures, and the uninhibited expression of human imagination in art and literature. As a result, the Hellenists fought against the Torah of Israel, with its focus on purity and sanctity.

One aspect of the mitzvah of lighting Chanukah lights is quite unusual. Unlike most mitzvot, the obligation to light is not on the individual but on the home (ish uveito). Only if one wishes to fulfill the mitzvah more fully does every member of the household light. Why is this?

The average Jew may not exemplify the ideals and beliefs of the Torah in his everyday life. But in his family life, one may sense the special light of Israel. Purity, modesty, and other holy traits are manifest in every Jewish home faithful to a Torah lifestyle. Therefore, the basic obligation of Chanukah lights — which represent Judaism’s victory over the corrupting influences of Greek culture — is not on the individual, but the home: ish uveito.

There are, however, righteous individuals whose personal life does in fact exemplify the sanctity of Torah. They are suitable to be Mehadrin, each one lighting his own Chanukah light, since the light of Torah accompanies them in all of their actions. It is about these holy individuals and the spiritual light they project that the Torah writes, “And all the peoples of the world will realize that God’s Name is called upon you and they will be in awe of you” (Deut. 28:10).

Finally, there is a third level, even higher — the Mehadrin min HaMehadrin. These are selfless individuals whose efforts are not for their own personal welfare, not even for their own spiritual elevation. Rather, they aspire to fulfill God’s Will in the world. The miracle of Chanukah inspires these elevated individuals to pursue their lofty goal, and they light accordingly, increasing (or decreasing, according to Beit Shamai) the number of lights each day.

Yet we may ask: what is God’s Will? What is the ultimate goal of creation? This question is at the heart of the disagreement between the schools of Hillel and Shamai.

The Mehadrin min HaMehadrin may follow one of two paths. The first is to meditate on God’s Will by considering the multitudes of peoples and nations that God created. For what purpose did God create all of these souls stamped in His Divine image? Surely God intended that ultimately they will be elevated, raised from the depths of ignorance and brought to the level of the righteous who delight in God and His goodness.

According to this view, the mission of the Jewish people is to inspire all nations to strive for Divine enlightenment and a life of holiness. The ultimate purpose in keeping the Torah and its mitzvot is not to elevate the Jewish people, but for the more universal goal of benefiting all of humanity. The focus of one’s life should not be love of one’s people but love of God and His Torah, for the Torah encompasses the true goal of elevating all of humanity, and love of Israel is merely a means to this end.

Love for the Nation

The second approach agrees that any form of self-love is unsuitable to be one’s highest goal, even if it is love of one’s own people. Rather, we should love that which is good for its own sake. We should strive to advance that which is the highest and loftiest. Since the Jewish people are blessed with a special segulah, an intrinsic quality of holiness, they have the potential to attain the highest state, and they will remain the focus of all spiritual life even after the elevation of the other nations of the world.

Love of Israel is thus a true value of Torah, since the ultimate goal will always be the elevation of Israel. The purpose of creation is not measured in quantity but in quality, and the Jewish people will always retain a unique advantage due to their segulah quality.

The School of Shamai

How do these two approaches relate to the disagreement between Beit Hillel and Beit Shamai?

The universalistic outlook sees Israel’s mission as an agent of change, inspiring all peoples to form a harmonious society living a life of righteousness and sanctity. Over time, the plurality of diverse national characteristics will diminish as they absorb the ever-brighter light of truth. As the nations are drawn to the holiness of Torah, their unique ideologies and traits will become less distinct. This is the approach of Beit Shamai, who taught to progressively reduce the number of Chanukah lights until there remains but a single resplendent light.

This view sees the story of Chanukah as a milestone in a long historical process. The confrontation with Greek culture and the subsequent victory of Israel brought about a greater interaction and influence of Israel upon the nations. The struggle with Hellenism significantly increased the world’s familiarity with the Torah’s teachings. Thus it is fitting that the lights of Chanukah should reflect the historical process of the world’s progressive elevation and unification.

The Opinion of Beit Hillel

Beit Hillel certainly concurred with this universal mission of the Jewish people. But is Israel merely a tool to elevate the rest of the world? The true goal of the Torah is to establish the highest level of sanctified life possible — and that can only be attained through the intrinsic segulah quality of Israel.

While the Jewish people appear to suffer from spiritual decline over time, the inner holiness of Israel can only be properly measured if we take into account all the generations over time. Every generation that affirms Israel’s special covenant with God, despite the pressures of persecution and exile, contributes to the overall segulah of this unique people.

The many nations of the world are certainly numerically superior. Yet Israel is not just a vehicle for their spiritual elevation. On the contrary, their elevation is a means that facilitates the emergence of a loftier sanctity of Israel. The nations will enable the unique segulah that will crown the world in the end of days — an entire people prepared to live life on the highest level of holiness. This is the ultimate goal of the world, as the Sages taught, “The idea of Israel preceded all of creation” (Breishit Rabbah 1:4).

How does this outlook see the lights of Chanukah? Despite the importance of the Hasmonean victory and the resulting increase in Israel’s influence on the world, the quantitative advance is still secondary in importance to the qualitative goal. Therefore on each night we add an additional Chanukah light, to symbolize the increased light of Israel. The focus is not on the gradual unification and elevation of the nations of the world, but on the increasing light emanating from Israel, as it intensifies in brightness and diversity, reaching out to each nation according to its special characteristics and needs.

We may now better understand the Talmud’s explanation for the opinions of Beit Shamai and Beit Hillel. Beit Shamai, who stressed the universalistic aspect of Israel’s influence on the world, compared the Chanukah lights to the bull offerings of Succoth. What is special about these offerings? The Sages (Sukkah 55b) noted that the total number of bull offerings was seventy. These seventy offerings were brought for the spiritual benefit of the seventy nations of the world.

Beit Hillel, on the other hand, taught that “in holy matters, one should increase and not detract.” The reason why love for the Jewish people is an authentic goal of the Torah is due to the special segulah of Israel. Its existence is a goal even higher than the elevation of all of humanity. Love of the Jewish people is rightfully considered a holy matter, as it fully appreciates the unique role of Israel in the universe.

To question whether Jewish nationalism is a genuine Torah value reveals a superficial knowledge of Torah. The real question is whether the ultimate Divine goal is quantitative — the elevation of all of humanity through Israel and its Torah — or qualitative — the incomparable segulah quality of Israel. To use Rabbi Yehudah HaLevi’s metaphor of Israel as the “heart among the nations,” the disagreement between Beit Hillel and Beit Shamai may be presented as follows: Is the heart subservient to the other organs of the body, as it provides them with life-giving blood? Or is the heart the central organ, protected and sustained by the rest of the body? Both of these positions are legitimate; “Both views are the words of the Living God” (Eiruvin 13b).

This is the basis for a true understanding of nationalism in Israel. It transcends the usual form of nationalism as it is found among other nations. This unique national love is based on the ultimate Divine goal that can only be fulfilled through the Jewish people. While Jewish nationalism contains elements common to regular nationalism, it is of a completely different order.