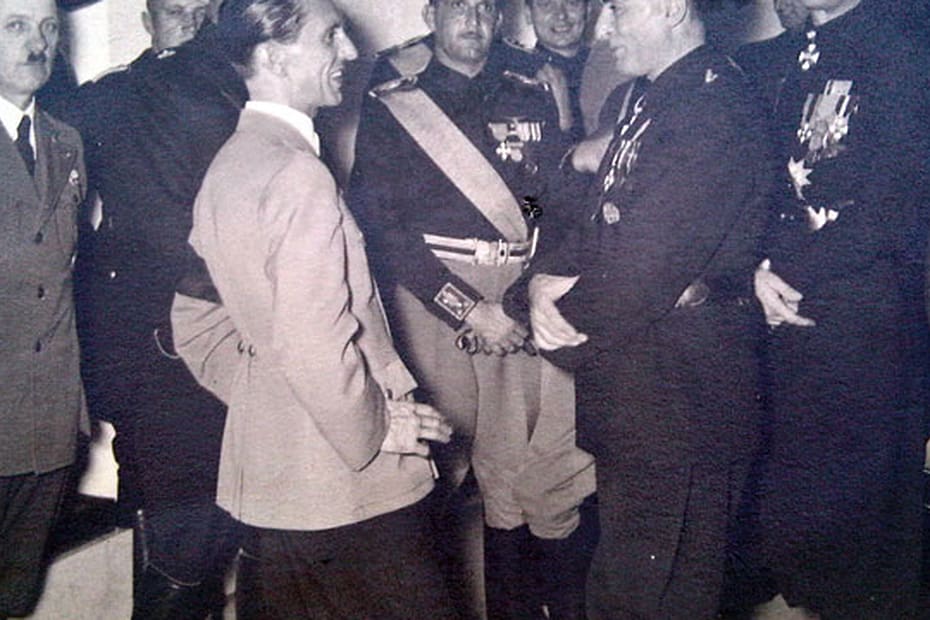 A BMW model at the International Geneva Motor Show. The author draws attention to German companies that got rich off the suffering of Jews and other oppressed persons during the Nazi era.

On September 30, 2007, Germany’s primary public broadcasting station aired a program entitled The Silence of the Quandts. The documentary revealed that in the 1930s and ’40s Germany’s wealthiest family produced weapons for the Nazis, seized the property of Jews, and exploited the labor of prisoners of war and concentration camp inmates.

The Quandts were by no means the only titans of industry and finance who collaborated with Adolf Hitler. In Nazi Billionaires, David De Jong, a native of Amsterdam who now resides in Tel Aviv, builds on articles he wrote for Bloomberg News between 2012 and 2018 to provide a detailed, compelling and bone-chilling account of the patriarchs of five industrial dynasties: Günther Quandt; Friedrich Flick; August von Finck, Sr.; Ferdinand Porsche; and Richard Kaselowsky.

All of them, he demonstrates, were “calculating, unscrupulous opportunists,” who joined the Nazi Party, the SS or both. When World War II ended, they suffered little or not at all. Their descendants continued to own or dominate iconic brands, including BMW, Daimler-Benz, Volkswagen, and Allianz. Still worth billions of euros and dollars, they have, with few exceptions, failed to acknowledge, let alone atone for, their actions.

Günther Quandt’s relationship to the Nazis was complicated. Magda, his former wife, mother of his son Harald, married Joseph Goebbels and became unofficial First Lady of the Third Reich. Nonetheless, by 1933 Quandt’s companies received lucrative off-budget contracts to facilitate Germany’s rearmament (which had been forbidden by the Treaty of Versailles), including light weapons and battery production, ammunition innovation,and the construction Luftwaffe fighter jets. “While people thought we were making cooking pots,” Quandt quipped, “we were already preparing for the Führer’s war in 1934.”

And Friedrich Flick’s steel factories (including companies “sold” to him by Jews at a fraction of their value) received a continuous flow of big orders from the army.

Aryanization was costly. Slave labor, supplied by concentration camp captives by 1942, was often deadly. In lead factories, workers were not allowed to wear gear to protect them from poisonous fumes. The limbs of prisoners burned by boiling hot lead were amputated. Flesh was pulled off the bones of captives whose arms and legs got stuck in machinery. In one weapons complex in Poznan, guards beat up young children who dozed off while working night shifts; 75 people were executed by guards and SS officers.

After Germany’s defeat and the onset of the Cold War, however, the Allies became more interested in containing the expansion of the Soviet Union in Europe than punishing Nazi collaborators. They assigned all but the most serious cases to regional denazification courts conducted by judges and prosecutors, many of whom were reluctant to mete out harsh punishment to their countrymen for convictions they shared.

De Jong’s industrialists insisted they had been forced to work with Nazis, who were solely responsible for the crimes that had been committed. They made extensive use of Persil tickets, exculpatory statements from witnesses, preferably alibi Jews, named for a German laundry detergent. August von Finck submitted forty Persilschein to Munich’s denazification court, each asserting he was apolitical, even anti-Nazi. A former confidante subsequently revealed that von Finck spent 500,000 deutsche marks to persuade potentially incriminating witnesses not to appear in court or alter what they had intended to say. Von Finck also blackmailed the prosecutor, threatening to reveal that he was gay.

Ruling that von Finck was only a follower of the Nazis, the court ordered him to pay 2,000 deutsch marks to a restitution fund. Dissatisfied with this outcome, von Finck appealed, was granted amnesty and resumed management of his companies.

As they survived and thrived, the moguls reestablished ties with former Nazis. In 1957, Ferdinand Porsche hired Joachim Peiper, a former adjutant to Himmler, who had commanded the SS tank unit responsible for the Malmedy massacre. Rudolph-August Oetker, Kaselowsky’s stepson, appointed Rudolf von Ribbentrop, the eldest son of the Third Reich’s foreign minister, as managing director of one of his banks. And Oetker channeled money through his conglomerates to Stille Hilfe (Silent Help), a relief organization for convicted members of the SS.

In 2019, De Jong reports, the four heirs of Albert Reimann surpassed the Quandts as Germany’s wealthiest family. Investigative reporters discovered that Albert was a rabid antisemite who began donating to the SS in 1931 and joined the NSDAP in 1932. During the war, he encouraged the brutal treatment of prisoners of war working in his chemical plant.

Reimann’s heirs, De Jong notes, recently removed Albert’s name from the family foundation. It now bears the name of their Jewish grandfather, the father of Emily Landecker, who had a decades long relationship with Albert that produced three children and was murdered by the Nazis. The Alfred Landecker Foundation has committed hundreds of millions of euros to educate people about the Holocaust and is tracking down and compensating survivors of forced labor at their companies. As part of Germany’s reckoning with its dark past, De Jong adds, a street named for Herbert Quandt, Günther’s son is now on a short list to be renamed.

That said, De Jong concludes that “the scale remains tipped in favor of money and power” – as many German business dynasties downplay or ignore the sordid sources “that stain their fortunes.” <

The writer is the Thomas and Dorothy Litwin Professor of American Studies at Cornell University.